Perchance Theatre at Cupids
OUR supporters
We are a non-profit organization. Our existence depends on the support of three revenue streams: public funding, ticket sales, and YOU, our gracious donors. Every donation made to Perchance Theatre at Cupids goes a long way. Support from our audience, donors, and sponsors helps to ensure that: we can continue to make high-class professional theatre accessible to as many people as possible, we can create jobs for young people in their region, and we can build opportunities for artists to work with high-calibre theatre practitioners from around the world.

In March of 2020, the world shut down under the weight of COVID-19, taking with it the entire performing arts industry. Knowing immediately that it would be one of the last industries to reopen and just how many artists here in our province would be impacted, Perchance Theatre responded by reimagining a way of working; restructuring to make that possible. We rebuilt a season that spoke to the reality of where we, as a community of artists and audiences across the province, found ourselves.


The Power of One was born. An initiative that spoke to the heart of the mission and mandate of Perchance – the power of words and ideas explored through classical text and performed in the outdoors. We channeled our passion for our province’s history and geography and the power of technology to reach far beyond our stage in Cupids to feature 40 of our province’s artists doing monologues from each of Shakespeare’s plays from Nain to the Southern Shore, in barrens and bays, forests and frozen land.


While we learned new skills as a company, we were also able to employ over 50 artists from all stages of career in all walks of life across our entire province. Employment that has not just helped financially in this terrible economic time, but holistically. The arts are a calling. Artists without work are pining because their work is what nourishes them; not just financially but spiritually.

The support of our donors has meant the world in giving Perchance the ability to breathe life into these types of initiatives and bring world class entertainment to Cupids. Your donation means we can continue to employ cultural workers in Newfoundland and Labrador.

Thanks and Ever Thanks.

The Sandbox Series  for Professional Development
is generously sponsored by:
Roger Pearson and Marget Davis. 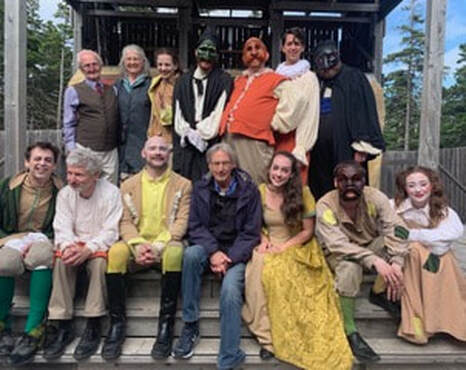