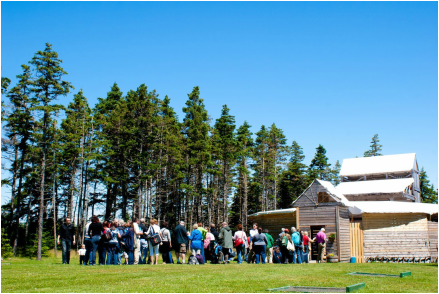 Led by artistic director Danielle Irvine, Perchance Theatre produces and presents classical theatre with a focus on Shakespeare each summer in Cupids, Newfoundland and Labrador, Canada.

As part of the Cupids 400 celebrations, a beautiful performance space was built that was modelled after Shakespeare’s famous open air Globe theatre in London.

Perchance Theatre features some of the province’s best stage actors and continues to provide established and emerging artists an environment for ensemble creation and professional development, and create unique experiences for audiences, inspired by open air Elizabethan playhouses.

Founded as New World Theatre Project in 2010 by Geoff Adams, Aiden Flynn and Brad Hodder as part of the Cupids 400 celebrations.  In 2014, the company re-branded as Perchance Theatre.

Perchance Theatre respectfully acknowledges that our theatre in Cupids is located on the ancestral homelands of the Beothuk, and that the island of Newfoundland is the ancestral homelands of the Mi'kmaq and Beothuk. Perchance also recognizes the Inuit of Nunatsiavut and NunatuKavut and the Innu of Nitassinan, and their ancestors, as the original peoples of Labrador.  Perchance strives for respectful relationships with all the peoples of this province as we search for collective healing and true reconciliation and honour this beautiful land together.

2011
The Merchant of Venice, directed by Jeannette Lambermont-Morey